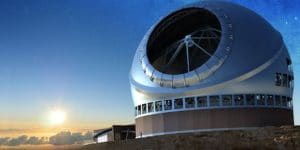 11.22.2019 update: After over 4 months of protests, the costs are mounting..  Hawaii state and counties have spent close to 12 million dollars relating to the protests involving the Thirty Meter Telescope.  National Guard costs and police time top the list of expenses. Other costs, such as overtime, travel, and miscellaneous supplies/benefits make up a majority of the remainder of costs.  Protesters trying to block access to the Mauna Kea road by camping in the middle have been one of the main  problems  Stay tuned for more updates

The controversy around building an enormous 3o foot telescope on  Mauna Kea, Hawaii’s tallest mountain, has raised many concerns.  Proponents of the telescope tout the economic benefits of tourism and jobs, while the protesters want to protect the mountain and the Hawaiian heritage that it has been.  It is a heated discussion that has received national press and celebrity endorsements.

It has been over 3 months now that TMT protesters have blocked construction access. Meanwhile, protesters continue to stand their ground, stating that the TMT project will desecrate Mauna Kea’s sacred summit. Many are left wondering if there is an end in sight for the standoff