Around 12 miles south of the famous Kailua Village lies the Kealakekua Bay, a marine-life sanctuary loaded with natural beauty and rich history. The crystal clear water at the Kealakekua Bay makes it the favorite snorkeling destination. It is also the home of tropical fish and colorful coral that inspired Disney for the animated hit “Finding Nemo”.

For ancient Hawaiians, Kealakekua Bay is a sacred site. The name Kealakekua translates to “the pathway of the God,” and it was believed that the Kealakekua Bay was the home to the Hawaiian fertility god, Lono-i-ka-makahiki. However, with a calming demeanor today, Kealakekua Bay has a dramatic past.

History of the Kealakekua Bay

Before 1779, thousands of Hawaiians inhabited this place. Fishing, swimming, and canoe paddling were the source of fun and livelihood for the locals. However, in 1779, things changed forever. A British explorer, Captain James Cook, with his ships the Resolution and the Discovery, sailed into Kealakekua Bay. Captain Cook and his crew arrived during what Hawaiians call the Makahiki Season. This is a time of festivity for the Hawaiians. Food, play, and peace are the essentials of the Makahiki season. According to some historians, the Hawaiians believed that Captain Cook was the Hawaiian god Lono, the god of peace, fertility, and agriculture. So they greeted him and his crew with open arms. The Captain and his crew enjoyed the feasts and fanfare, and in return, they offered tours of his ships to the locals. The Captain and his team also hosted a display of fireworks that both spellbound and frightened the Hawaiians.

After almost two weeks of festivities, the Captain left with his ships and sailed along the coast of Alaska. On their way, they encountered a storm, and the ships needed repair. So they head back to Kealakekua Bay, but this time the bay was strikingly different. The Makahiki festival was over, and the Hawaiians had set up the tikis of Ku, the God/symbol of war. Some historians believe that Captain Cook and his crew left an unfavorable impression on the natives, while others believe that the Hawaiians wanted metal from the ships, which was a valuable commodity not common on the island. Therefore the locals took over one of Cook’s small boats and burned it to ashes to get hold of the nails. These metal nails were excellent for making fish hooks, an essential tool needed by the locals for fishing.

It was when Captain Cook demanded his ship that a fight began. Captain Cook, along with five of his crew, was killed during the dispute. While people did not regard him as the Hawaiian god, they recognized his position and offered him the Hawaiian burial where his body was burned. The ashes were distributed among the tribal chiefs. 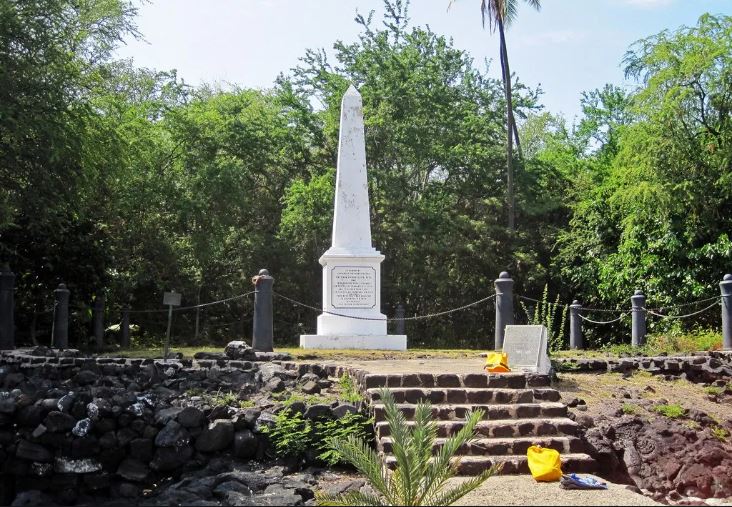 It was not until almost a century later that the U.S. government allocated a small area of land where the Captain Cook Monument was established in 1894. Since the land is considered to be a part of the British Territory, the British Navy maintains the monument.

Also, the largest mausoleum in Hawaii can be found at the Kealakekua Bay. This large cliff is home to thousands of lava tubes and some dramatic local traditions explain how the lava tubes are fueled. If you want to visit a travel destination with both beauty and history, then Kealakekua Bay should be your choice. To know more about Kealakekua Bay’s history or visit the Big Island, contact Kona Directory today!

We use cookies on our website to give you the most relevant experience by remembering your preferences and repeat visits. By clicking “Accept” or continued use of site, you consent to the use of all the cookies. Read More
Do not sell my personal information.
Cookie settingsACCEPT
Manage consent

This website uses cookies to improve your experience while you navigate through the website. Out of these, the cookies that are categorized as necessary are stored on your browser as they are essential for the working of basic functionalities of the website. We also use third-party cookies that help us analyze and understand how you use this website. These cookies will be stored in your browser only with your consent. You also have the option to opt-out of these cookies. But opting out of some of these cookies may affect your browsing experience.
Necessary Always Enabled
Necessary cookies are absolutely essential for the website to function properly. This category only includes cookies that ensures basic functionalities and security features of the website. These cookies do not store any personal information.
Non-necessary
Any cookies that may not be particularly necessary for the website to function and is used specifically to collect user personal data via analytics, ads, other embedded contents are termed as non-necessary cookies. It is mandatory to procure user consent prior to running these cookies on your website.
SAVE & ACCEPT
%d bloggers like this: